The New Student is a story by Pablo De Santis, a great Argentine author, who is well-known abroad and has been translated into several languages. The book has been illustrated by an artist who also has an important and interesting international profile. This is a story containing perfectly balanced doses of suspense, humor, intrigue, tenderness, and food for thought. Without being moralizing, it invites us to reflect and sends an important message on the human condition and the often-dangerous notion of “perfection”. This book has been awarded three prominent international prizes: The White Ravens (Germany), Cuatrogatos (United States), and ALIJA (Argentina).

It had been a month since we started the sixth grade when the teacher showed the new student in. Everything about him was perfect: his starched white coat, his freshly polished black shoes, his golden hair, his blue eyes ─made to amaze.

The teacher sat him by the window overlooking the yard, next to me. As soon as he sat, the new student glanced over his shoulder, as if he wanted to see what I had written in my notebook. I didn’t like curious people, even less so cheats, so I closed it.

In the following days, the new student suffered some attacks from the boys, who found him too neat, too silent, too blonde. Since he would just respond with an undaunted glance and look away, they got bored with the attacks and left him alone. Whenever I approached him, I thought I could hear a tick-tock; and I fancied he had a hidden clock to aid him with punctuality, as I never saw him get to school a minute too late or too early.

The girls and I were enthralled by his blue eyes. One by one we approached him, and one by one we turned away. He was shy and didn’t look at anyone in the face. just open notebooks. Whenever he did look into your face with his huge eyes, you had to look away. His stare was somewhat frightening to us, as if he saw everything from afar, as if he were a prince who had decided to leave his palace for a few days to lead a common boy’s life, but he knew that none of all that was real, and his palace and his golden rooms were waiting for him.

He kept looking at my notebook over my shoulder, and I kept closing it so that he would not copy from it. But soon it became evident that he had no need to cheat because he was never wrong and got straight A’s. If an exam took us an hour, he would complete it in five minutes and afterward sit staring at the empty yard, as if a leaf falling from a tree or some bird’s flight were a sight worth his utmost attention.

He had no siblings and no mother, he lived with his father, who had set up a shop three blocks from the school with a sign that read “Adam’s Model-Making Shop.”  He sold electric trains, steam engines, ships in bottles, and some balsa wood aircraft kits. When I passed by the shop window, on my way to school, I always saw his father repairing some locomotive, using long, thin screwdrivers to adjust some tiny screws.

In August, the new student missed three days in a row and on my way out the teacher called me aside and asked me: “Emma, since Mr. Adam’s shop is on your way home, would you please ask him why his son is missing classes?”

Ten minutes later I came into the shop. There was no one behind the counter. “Mr. Adam,” I called shyly, but no one answered. A red curtain separated the store from his workshop. I drew the cloth barely enough to stick my head in. A grey light came in through the skylight. I stood dumbstruck and motionless as I tried to understand what I was seeing.

The new student was lying on a table. He had neither shirt nor white coat on, and countless mechanisms jutted out from his open chest: cables, transistors, batteries, golden gears. On the left side, I saw some sort of steel capsule, vaguely resembling a heart. With the same thin screwdrivers he used to repair the trains, the father was working on his son’s mechanisms. The new student had his eyes open. I walked away noiselessly. I was shivering.

The new student returned to school the following day. I said nothing about my discovery to anyone. But I didn’t speak to him again. When he was nearby, I thought I could hear a horrible tick-tock coming from inside his chest, and it became stronger and faster when I was close. Indifferent to my rejection, he kept spying on my notebook, as if something in my ill-made maps and spelling mistakes could rival his perfection.

Sixth grade was over, and seventh grade passed very quickly. In the middle of the summer, on a stiflingly hot day, I went by the shop. The window was bereft of trains, and instead of “Adam’s Model-Making Shop,” a sign read: “For rent.”

Some years passed. I finished high school and graduated as a teacher. I got a job in a school near Parque Chacabuco. I had already been working there for some time as a sixth-grade teacher when, on an April morning, the principal knocked on the classroom door and said he had to introduce me to a new student. Then he came in, exactly the same as I had known him, with his golden hair and his blue eyes, but now his shoes were unpolished, and the white coat –I wondered if it was the same– did not look like before. It looked real, with some patches and one or two stains.

When the bell rang and everyone went outside for recess, I asked him to stay behind for a minute. I did not have to tell him who I was, he had recognized me immediately, in spite of the years. I asked him about his father.

“He settled in nearby. Every two or three years we have to move to another neighborhood, so that no one will notice that everyone changes except me.”

“And are you not bored of school, of studying always the same?”

He regarded me with surprise.

“On the contrary. I have so much to learn.”

“What can you learn? Ten years ago, when we were classmates, you already knew everything.”

“Ten years ago, I knew nothing. But each year I make some progress. My father is very proud of me.”

Now he didn’t carry a suitcase, but a backpack. He took out a notebook.

He went over the pages. When I came near him, the tick-tock became faster, but it also sounded different. The new student was proudly pointing at a mistaken division, a spelling mistake, an inkblot, the teacher’s corrections in red. Then I understood why he had been spying over my shoulder. I understood what was the lesson which, throughout the years and the repeated school desks, we had all unwittingly taught him. It had taken him years, but the new student was now able to make a mistake. And for an instant, the tick-tock in his chest sounded like a heartbeat. 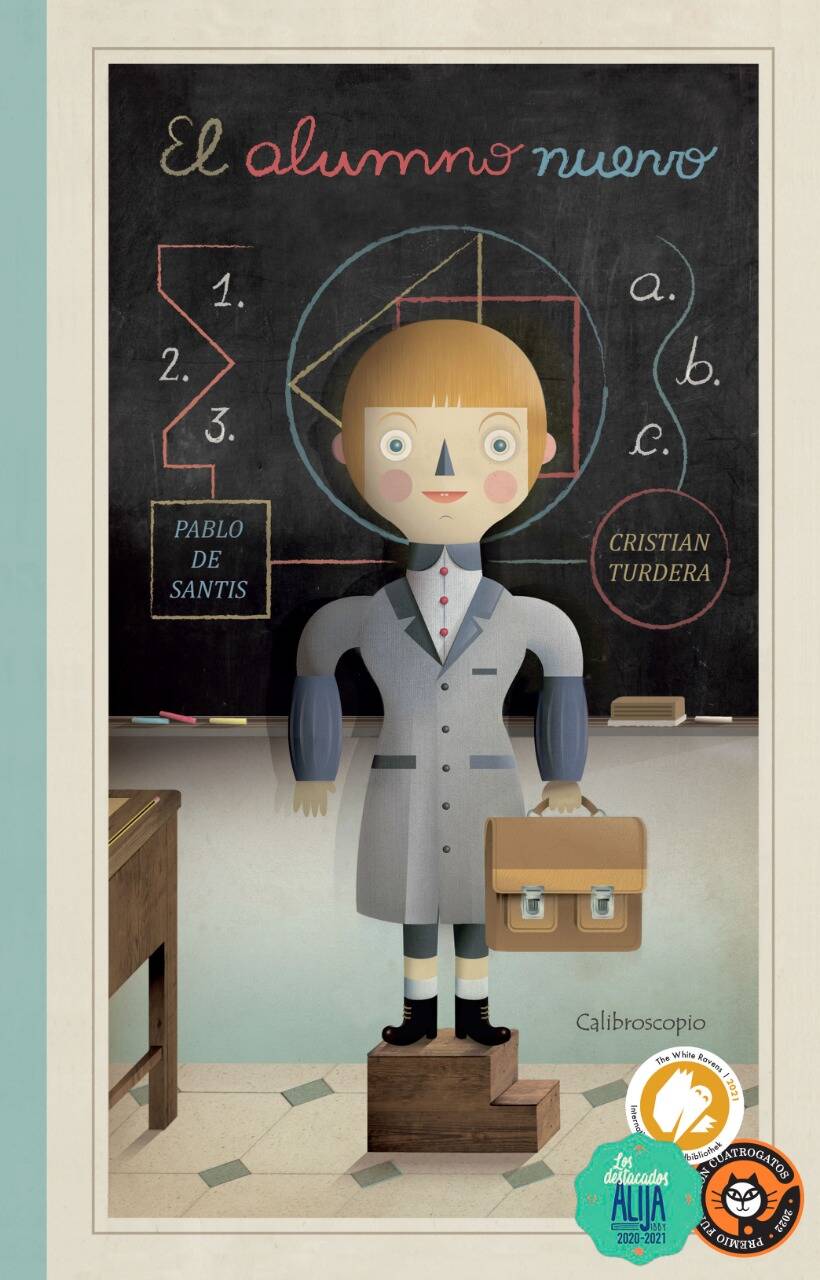 Pablo de Santis holds a BA in Literature from the University of Buenos Aires. He has worked as a journalist and comic-strip writer. He is a member of the Argentine Academy of Literature. Among other works, he has published the novels La traducción (Translation) (1998), Filosofía y Letras (Philosophy and Literature) (1999), and El calígrafo de Voltaire (Voltaire’s Calligrapher) (2007), all of them by Editorial Planeta. Some of his most notable works for younger readers are El buscador de finales (The Ending Seeker) (2011), Leyra (2018), and Hotel Acantilado (2021). He has been granted the Konex Platinum Award (2004), the Planeta Casamérica Award (2007), the Award for Best Novel from the Argentine Academy of Literature (2008), and the National Culture Award (Argentina, 2012).

Cristian Turdera (Buenos Aires, 1973) is an illustrator and designer, who combines both disciplines seamlessly. He is an assistant professor to the Chair of Illustration (Roldán) at the University of Buenos Aires (UBA). More than 50 books with his images have been published, notably Canción decidida (A Determined Song), with texts by David Wapner (Pequeño editor, 2003); three volumes of the project El Topo Ilustrado (The Illustrated Mole) along with Tobías Schleider (Ediciones de la Flor, 2014, 2015, and 2016); and El alumno nuevo (The New Student) with writer Pablo de Santis (Calibroscopio, 2021), among others. He currently works for advertising agencies, magazines, newspapers, and publishing houses from all over the world. This year, two cartoon series developed by him have been released through Argentine TV channel Paka: La familia Motorjón (The Motorjons) and La pregunta absurda (The Absurd Question).