This tale is based on a true story. To stop the Javan rhinoceros going extinct, people decided to take a desperate but effective step: to cut off their horns and remove the object of their hunters’ greed.
Rita is a rhino who’s had her horn cut off. And she isn’t happy about it. The story is told by Bufágido, a little bird who runs along Rita’s back picking off the bugs that gather there. It begins like this:

I have chestnut-brown feathers and a white breast.
My real name is Bufágido, but Rita
calls me Budo.
Rita’s feeling sad.
I’ve been rehearsing the words
to tell her since the morning, but it’s no use. Every time I try,
I get all nervy and start stammering.

What’s happening to Bufágido – Budo – isn’t hard to understand: he’s hopelessly in love with Rita. And she… hasn’t even realised. Rita’s sad because her horn’s been cut off. He does his best:

From morning
to night I run around her back and keep it
spotless. No grubs, no flies, no ticks.

But it isn’t enough to make Rita’s sadness to go away:

Though she doesn’t know it, my little heart
is bursting with love for hers.

But for all the difficulties that crop up right from the beginning, this is a typical love story with a happy ending. Rita finds her partner. Dok is a rhino who, like her, has had his horn cut off to save his life. And Bufo finds a companion in the beautiful little bird who cleans Dok’s back. It was love at first sight:

She has chestnut-brown feathers and a white breast.
Nibbling a tick, she cocks her head and gives me a look out of
the corner of her yellow eyes that takes my breath away.
Then she snuggles down between Dok’s ears,
gives an exhausted sigh with her red beak and says to me:
‘Tomorrow will be another day.
I’m afraid I’ll stammer, but
miraculously the words come out all in one rush.
‘Yes,’ I say, ruffling my white feathers.
‘Tomorrow everything will be perfect.’ 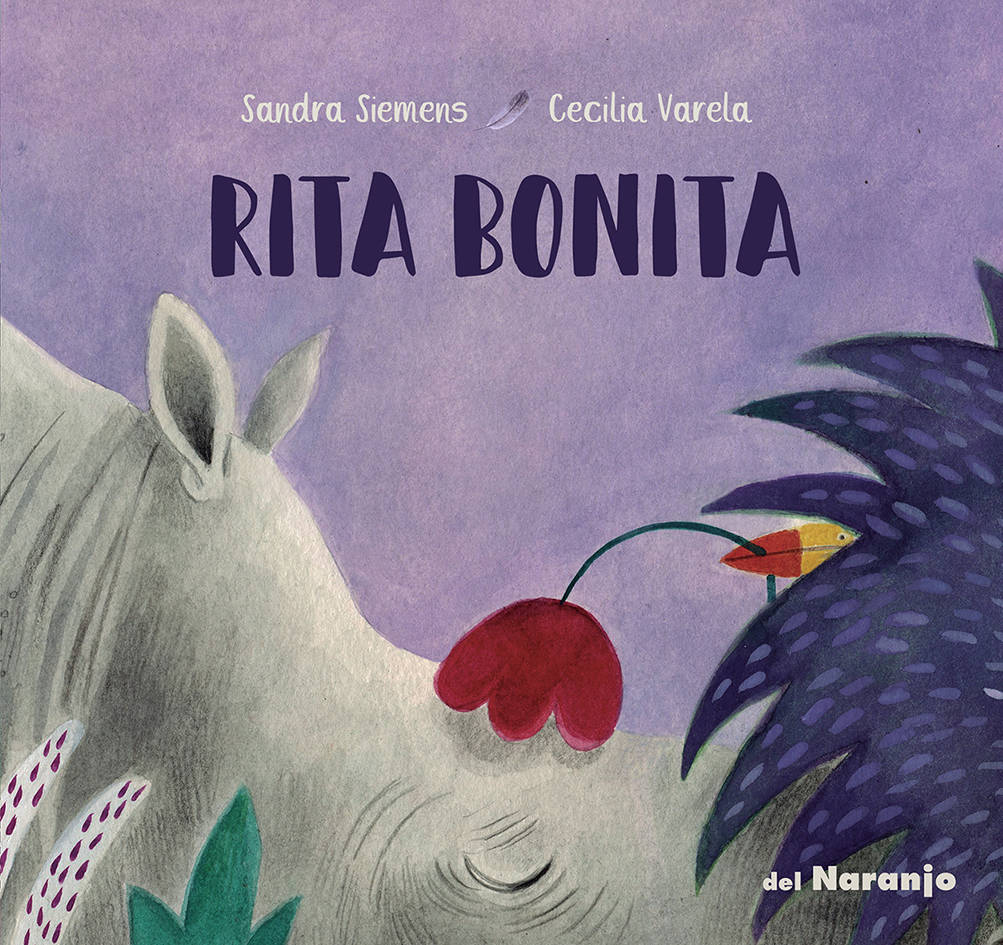 Sandra Siemens is an Argentine writer of children’s and young adult fiction. She studied Anthropology at the University of Buenos Aires, and Literature at the National University of Rosario. She has received the Norma Fundalectura Prize (2008) and the El Barco de Vapor Prize (2009 and 2019), as well as a special mention in the National Prize of Children’s Literature for the 2008-2011 period. Some of her works have been chosen by The White Ravens for the Internationale Jugendbibliothek and have been singled out by ALIJA, the Cuatrogatos Foundation, and the Venezuelan Book Bank. Her books have been published in Latin America, the United States, Europe, and Asia, and have been translated into many languages.

Amanda Mijangos holds a degree from the School of Architecture and a Diploma on Illustration from the San Carlos Academy, UNAM (University of Misiones, Argentina). She studied Illustration in Buenos Aires, Argentina, and Ceramics at the INBA School of Arts and Crafts; she has combined both crafts since 2015. She has illustrated literature and poetry for people of all ages, and her books have been included in the IBBY Honor Roll, the White Ravens Catalog, and the Venezuelan Book Bank. Since 2013, she has managed and coordinated independent activities for the professionalization of illustrators, as well as drawing and illustration workshops for people of all ages.