Saverio is a dog from the tip of whose tail a flower has bloomed. From then on, many things happen to him: Aunt Sidonia uses him as a flower vase, the lady-friends coming for tea scare him, many people in the street attempt to clip the flower off. His troubles are over only when Laurita comes along. She likes the flower where it is. In his Grammar of Fantasy, Gianni Rodari states that the fantastic binomial triggers the spark of creativity. One word comes across another word that challenges it, forces it to stray from its usual path, and discover its capacity to create new meanings and penetrate unexplored universes. In Cola de flor, this binomial is formed by the words “dog” and “flower”. Even though he barks, skips, talks... the dog, Saverio, is not a mere personification of an animal. He is a character faced up to a new circumstance in his life: a daisy has bloomed on the tip of his tail and he does not know what to do about it.

ONE WINTER DAY, A DAISY BLOOMED ON THE TIP OF SAVERIO’S TAIL.

IT WAS SUPER NICE TO FEEL LIKE A DOG WHO ENDED IN A FLOWER. UNTIL THE UNTHINKABLE HAPPENED.

“WHAT DO I DO NOW?” BUT HE DID NOT HAVE MUCH TIME TO THINK ABOUT IT. AUNT SIDONIA STOOD HIM ON A CROCHET TABLE MAT ON THE SIDEBOARD.

“LUCKY ME! TODAY MY FRIENDS ARE COMING FOR TEA, AND I COULDN’T GET FLOWERS TO DECORATE THE HOUSE. SAVERIO, YOU’LL WORK AS A FLOWER VASE THIS AFTERNOON.”

“GRRUPIGRRUPI.” GRUMBLED THE DOGGIE, “I GET SO BORED PLAYING THE FLOWER VASE.”

“STAND STILL, WILL YOU?! AND KEEP YOUR TAIL HIGH AND STIFF SO THAT THE DAISY STICKS OUT!”

THEY MADE SO MUCH NOISE THEY SCARED SAVERIO OUT OF HIS WITS AND HE TUCKED HIS TAIL BETWEEN HIS LEGS. JUST AS HE WAS TUCKING IT DEEP, A YOUNG LADY SAW THE FLOWER AND SAID, “WOW, WAW, WOO. I WILL PLUCK THE PETALS OFF THIS DAISY SAYING HE LOVES ME, HE LOVES ME NOT, TO SEE IF MY LOVE REMEMBERS ME.” 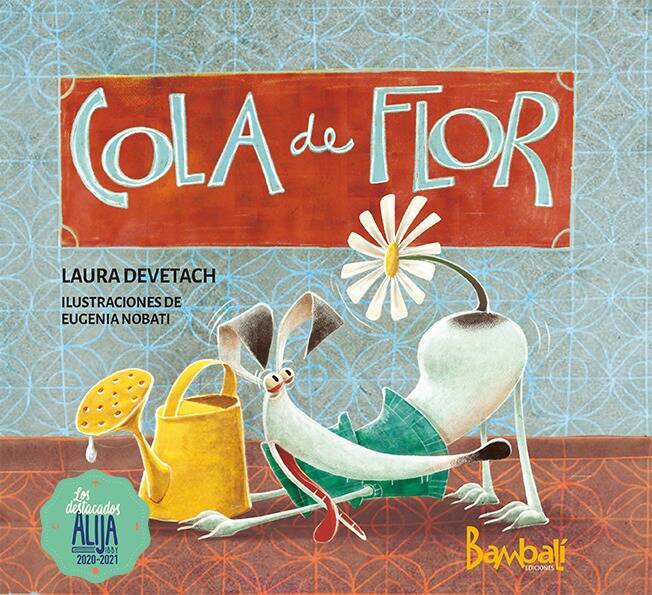 Laura Devetach was born in Reconquista, in the Province of Santa Fe in Argentina, in 1936. She graduated in Modern Literature from Universidad Nacional de Córdoba. She is a writer, a teacher, and a poet. She has authored multiple children’s books that have become a reference in the field. She has been awarded several national and international prizes and acknowledgements, such as the SM Ibero-American Prize to her outstanding career. Some of her books are ¿Quién fue primero? (Who was first?), Periquito, Una caja llena de y otros poemas (A Box full of, and other poems), La planta de Bartolo (Bartolo’s Plant), Para que sepan de mí (So that you Know of Me), La construcción del camino lector (Constructing the Reader’s Path), La señora de la calle Cangallo (The Lady from Cangallo Street).