This is the most comprehensive work on issues connected to womanhood and femaleness, and, without a doubt, it will become a benchmark on the subject. The ideas addressed go beyond the classic theories on the female experience and open new paths. It will become a must-read text for the discussion of such a relevant, contemporary topic.

Introduction by the Author:

This book is the result of a line of work that I have been developing for quite some time. It is based on my psychoanalytic training and my practice, and it combines my women-related readings and interests from other fields: philosophical, epistemological, anthropological, historical. This book stems from my interest in the ways of thinking underlying conceptualizations of women in psychoanalysis. Addressing the connection between psychoanalysis and women implies considering the complex relations concerning the issue of sexual difference and the ever troublesome subjectivation of one's own sex. I will try to show a personal selection of issues that are fundamentally related to the dilemmas and questions that I have come across both in my clinical practice and their corresponding theoretical developments.
This theoretical journey has a common thread: to unravel the impasse of binary thinking, as well as essentialist conceptions about women and femaleness. Along this path, my dialogue with Freud is a permanent one, intrinsically connected with his multicentric and complex thinking. This implies that I will not follow a chronology of his work, nor of the post-Freudian authors who approached this subject.
Other authors I have argued, agreed with or who have enriched my way of thinking will appear in each chapter. Nevertheless, all of them will do so in the context of a central theme related to a theoretical or clinical problem.
No chapter is self-contained. All of them refer, to a greater or lesser degree, to problematic areas, some of which are further elaborated in other chapters. Some topics overlap, as needed, either to follow a common thread in their development or because some concepts were analyzed in a different context or considering other references.
Also, questions related to love, desire, motherhood, the passage of time, and beauty are discussed in this book.

The chapter titled “Why a Feminine Perspective?" updates and expands on the points raised throughout the book relative to everyday life issues, considering the changes in subjectivities observed in therapy sessions nowadays, and in the theories that attempt to explain such changes, as well as in the logical rationale behind them.
The chapter on "The Feminine Position. A Heterogeneous Construct" takes the Freud-Jones debate about primary or secondary femininity as its starting point. Psychoanalysis harbors diverse, and often conflicting, theoretical positions on the conceptions of women and the sexual difference, namely whether femaleness may or may not be symbolized; whether it is subject to psychical representations or whether it falls into the categories of lacking, emptiness, negativity, absence. Also, in connection to these questions, whether or not a primary femininity exists and, if so, how it should be conceptualized. This debate is adopting more sophisticated forms, configuring exclusive notions that cut across psychoanalytic theory. My proposal will be to center the discussion around the cross reference between the paradigm of complexity (Morin, 1986) and the psychoanalytic theories on women and femaleness, confident that the same theoretical and clinical elements change their significance when approached from a different perspective.
In "The Feminine Perspective and the Representational Field", the need to explore other domains and other logical frameworks, besides the "phallic order", is stressed. Notions such as gender diversity, the fundamentally female, and their relation to the sexual difference are analyzed. I include the concept of additional psychological violence as an acting element in relation to the masculine/feminine polarity.
The chapter titled "The Limits of Femaleness - The Other" analyzes the relation of femaleness with otherness as a category, highlighting this concept’s polysemy. I introduce the idea of limit as conceived by philosopher Trias (1991), that is, as an intersection zone and not as a negative element, opposed to a center. My proposal is to apply this notion to the mother-infant intersubjective space and, on another level, to the constitution of subjectivity.
In "Women’s Mid-Life", aspects related to beauty and changes are emphasized and linked to certain vital crises, and to J. Kristeva's concept of abjection (1980).
In "Love and Power. Love Conditions in the Freudian Discourse", the Freudian theories on the love/ desire divide are taken as a starting point, where emphasis is made on love as the foundation for the feminine position, and desire, for the masculine position, according to standards and ideal representations of the heterosexual couple.
In "Itineraries of Love Life. Discourse and Ideals", the paths of love are considered in connection with the categories of repetition and differentiation. The concept of open systems is included in this analysis to apply it to the psychoanalytic field. Furthermore, the relevance of the imaginary, which overflows the categories of deception and illusion, is underlined.
In "Maternity and Female Sexuality in View of New Reproductive Techniques", biotechnological contributions in assisted fertilization trigger a review of notions around womanhood and maternity. The proposal is to unfold a multicentric perspective on maternity that articulates several coexisting registers.
The chapter on "Femininity and Desire" highlights the existence of a limit to the concept of desire as an original lack of being. Deleuze's conceptions are also considered (Deleuze and Parnet, 1980), in connection with desire as production, as a possible enabler to other theoretical options. Another perspective is also included: the concept of imaginary production (poietics), affecting the construction of subjectivity.
In "Towards a Deconstruction of the ‘Woman’ as a Universal Category”, the categories of universal and individual are analyzed in relation to the feminine subjectivation. This chapter also addresses the contributions and limitations of deconstruction, and the need for a link with symbolic mediation operations that generate new meanings.
In the chapter titled "Between Sex and Gender: The Paradigm of Complexity", psychoanalytic theories involving sexual differences are discussed, along gender theories. In both instances, both insights and impasses are underlined. The relations between the trans and intersubjective fields, on the one hand, and the intrapsychic, on the other, are addressed, emphasizing the need for a complex configuration of the elements at stake.
The chapter on "Alterity, Diversity and Sexual Differences" provides a critical analysis of concepts traditionally linked to femininity, such as those pertaining to its enigmatic essence, as well as to the inherent disjunctions of dichotomous mindsets. It also considers the polysemy of the term ‘feminine’ and the lines that arise in connection with the insertion of subjects in a context of social ties.
The chapter on "Differences(s). New constructs" was developed for this new edition to establish a common thread between the questions and issues raised throughout the book, especially around the boundaries/spaces, in order to remove the obstacles of binary thinking. Overcoming dichotomous disjunctions (gender versus anatomy, unconscious desire/psychosexuality versus gender, among other dualistic options) was part of this project.
The work on knottings among different types of vectors is also part of the proposed journey. The mediations and disjunctions between sexed bodies, generic beings and subjects of sexual difference are included in this work, together with their multi-voiced being. The need to analyze their genealogy and deconstruct their implications marks the itinerary of this text.
In several chapters, I deal with Foucault's (1979, 1984) notions of power, which situate power and dominance as constitutive elements of human relations. They also extend to the masculine/feminine polarity and are a source of identification statements through the child's relations with his/her primary object and oedipal objects. Throughout the book, questions concerning the relations between the female and the symbolic universe, as well as the concept of absence, unfold in connection with a controversial issue: the relation between subject and femaleness that modernity has been unable to resolve. 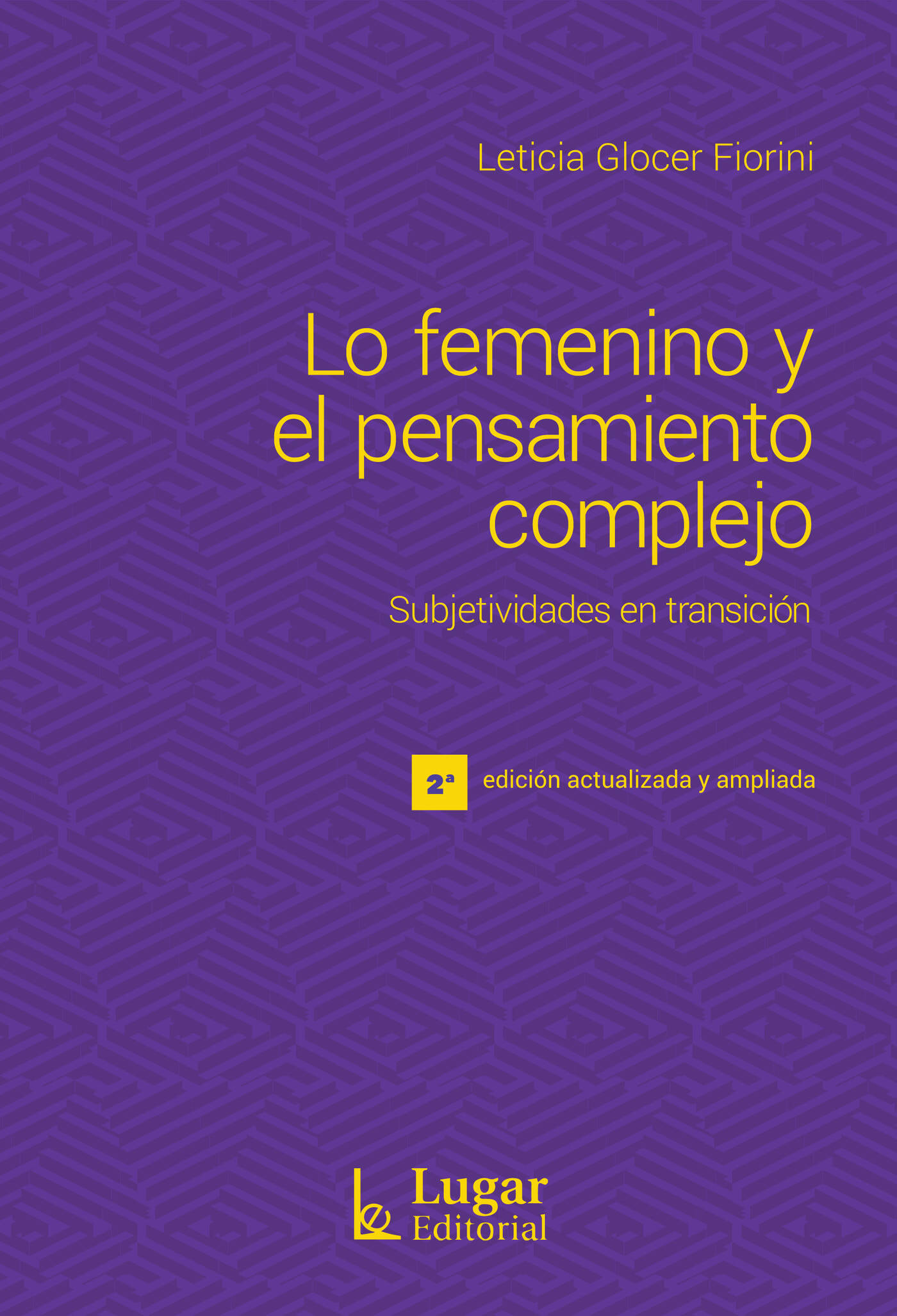 Leticia Glocer Fiorini is a physician and psychoanalyst. She is a full member of Argentinian APA (Argentine Psychoanalytic Association) and has a full-time teaching role. She holds a master's degree in Psychoanalysis. She was President of the Argentinian APA and Director of Publications for the International Psychoanalytic Association (IPA) and the Argentinian APA. She co-directs Latin America’s IPA committee for Sexual and Gender Diversity Studies. She is a professor and member of the master’s Program Committee on "Interdisciplinary Studies on Subjectivity," School of Philosophy and Literature, UBA (University of Buenos Aires). She received the Celes Carcamo Award granted by the Argentinian APA for her paper "La posición femenina: una construcción heterogénea" (The Feminine Position: A Heterogeneous Construction). She has published numerous book chapters and papers about her studies on femaleness, sexual and gender differences, unconventional parenthood, and other related topics, for Argentinian and foreign psychoanalytic journals.