Urban hydroponics allows for the production of fresh vegetables in reduced spaces without using soil and in complete harmony with the environment. Additionally, it is quite simple to maintain and a source of very high-quality produce. Because the best agriculture is the one that can be traced from its origins all the way to its consumption, this book has been designed as a tutorial full of efficient and conscientious options to help you build your own hydroponic garden at home. You will get aromatic plants all year long, an infinite variety of leafy greens, as well as cruciferous vegetables in the winter, cherry or round tomatoes in the summer, peppers and eggplants in the fall —the list of varieties is endless!

What role does urban agriculture play in this context?

The urban fabric is making its way over rural environments —in the same way that the rural and the agricultural are making their way over natural environments. The majority of the vegetables that are laid down on our tables come from “green belts,” which are production areas surrounding big cities.

Faced with mounting challenges, specialists must find viable alternatives that allow us to keep producing in areas surrounding cities while maintaining harmony with social life and the environment. Due to their potential to grow food that is accessible to consumers with a low carbon footprint, peri-urban areas are strategic spaces for developing agriculture, fruits and vegetables, and small-scale animal production systems.

Years of soil cultivation —with a heavy use of agrochemicals— have led to the neglect of certain aspects related to the pollution of natural resources, such as water and the food that is then consumed by families. In the conventional production of soil-grown leaf greens, the contamination of vegetables with agrochemicals and fecal coliforms poses a serious public health issue, potentially contributing to the emergence of diseases.

Water, the most valuable natural resource

Unfavorable weather conditions have reduced productivity and product supply in the market. Freshwater supply around the world is decreasing at an alarming rate, and the water necessary for food production is particularly scarce in several regions.

Despite its abundance, the freshwater that is used for food production is scarce. If we were to represent all water on Earth as 100 gallons, 97 gallons would be seawater, and the remaining 3 would be ice. That is to say that only around 3 gallons out of the whole would be consumable freshwater —drinking water pumped from underground, from rivers or from freshwater lakes. Under resource scarcity conditions, it is necessary to minimize water loss. 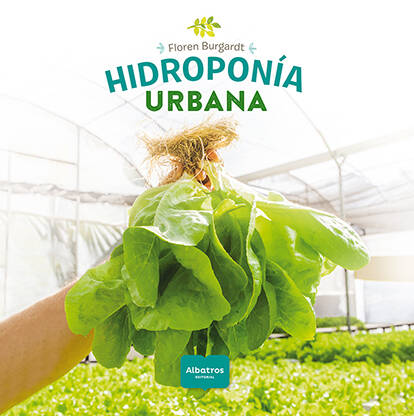 Florencia Burgardt was born in Entre Ríos and studied Agronomy in Buenos Aires. In 2016, she met Sebastián Padín, founder of Verdeagua, and that was the moment when hydroponics became her path in life. Today, Verdeagua is a social-environmental company with over 2000 hydroponic gardens set up in Argentina. It provides guidance to horticulturists all over the region and develops production projects at commercial scales.