Traces in the sky

Alicia Barberis invites us to travel through the moving story of Lucia, a young Mocovi girl (indigenous tribe from South America) who ends up working in the butcher's shop managed by “Bull” —her aunt's sinister husband—, instead of pursuing her studies, as was her dream. According to the Mocovi cosmovision, Nayic Moqoit (the Milky Way) points at a journey where you set out from what is known to cross strange and dangerous places, thus healing something of your own or in others. Those who do so have the power to make the times come together and can follow the ancient traces left in the sky to guide them. That will be the challenge the protagonist faces in this coming-of-age novel about a journey in search of identity, where she, almost without intending to do so, heals old wounds. The discovery of love, the value of friendship, and her own origins emerge as the central themes in the journey that this young woman undertakes. Huellas en el cielo, written with a poetic, powerful and captivating voice, adds to a quest that Alicia Barberis had already initiated with novels such as Pozo ciego (Cesspool) and Monte de silencios (Mount Silence). All three works share a specific geography and seek to give voice to the oppressed beings that inhabit it; in this case, the focus is on the descendants of native peoples. 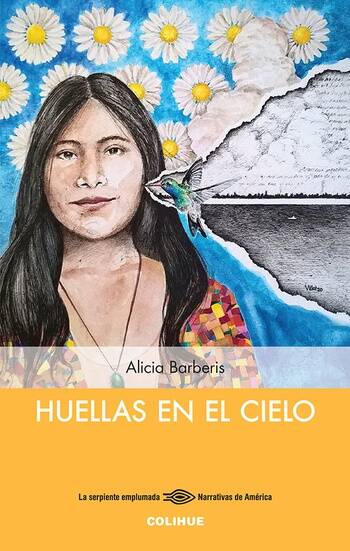 Alicia Barberis was born in Felicia, province of Santa Fe. She is a writer, oral storyteller, and coordinator of literary and reading workshops. Ediciones Colihue has published her narrative works for young people: Cruzar la noche (Crossing the Night) (1996), La casa m (The M House) (2009) and El misterio de las letras perdidas (The Mystery of the Lost Letters) (2009). She is also the author of these books (among many others): Una máquina para hacer llover (A Rainmaking Machine) (1993), Mi hermano Jaci (My Brother Jaycee) (2004), El científico (The Scientist) (2006), El nuevo mundo (The New World) (2009), La casa del crimen (House of Crime) (2009), Las brujas también se enamoran (Witches Also Fall in Love) (2009), La casa del viento (House of the Wind) (2010) and Cuando el diablo anda suelto (When the Devil Is on the Loose) (2011). As an oral storyteller, she has taken her performances to different parts of Argentina, Mexico, Cuba, and Spain. As a result of this experience, and as an introduction to new storytellers, she wrote the book Viaje hacia los cuentos: El arte de contar cuentos a los niños (A Journey Towards Storyland: The Art of Telling Stories to Children), which has also been published by Colihue.