When I first entered the world of plant-based cooking, many years ago, there was virtually no information available in Argentina, and practically no one would follow that cooking trend. It was a long journey towards understanding that there is another way to eat, much more mindful, as well as tastier. This book is the ABC of plant-based cooking that I would have loved to have at that time. It is ideal for those who are discovering this universe and have no idea what to cook or where to start. Displaying a very wide range of recipes, Nina Carreras introduces us to new flavors and invites us to reconsider our nutrition and consumption habits. She advocates a more mindful and creative diet, filled with colors, scents and flavors, away from supermarket shelves and take away dispatches. Here’s the present and future of food and eating.

WHAT IS A PLANT-BASED DIET?

The plant-based movement seeks to reject animal-origin foods. Instead, it suggests we should base our diet mostly on plants. It is a growing trend all over the world that opts for real, natural food, very far from pre-packaged products.

This is a key point, because plant-based is not just a vegan or vegetarian diet but also, and fundamentally, it is a healthy and environment-friendly diet. There are many vegan products, such as soft drinks, commercial cookies, sweets, etc., which are not necessarily healthy. In this regard, a plant-based diet improves on veganism or vegetarianism, since the focus is on giving up ultra-processed foods, such as those containing ingredients based on wheat flour, cornmeal, sugar, and fatty foods, or foods that are filled with chemicals, and flavoring or coloring additives, which are not nutritious and generate addiction.

From another point of view, veganism is more encompassing, as it entails a whole philosophy of life, whereas plant-based nutrition is confined to the realm of cooking.

Ideally, it is also an organic diet since some of its concerns have to do with agroecology –the protection of soils to prevent depletion– and the consumption of pesticide-free and agrochemical-free vegetables and fruits.

Likewise, choosing mostly seasonal and local foods helps us eat foods in their prime, at the optimal time when what the ground has to offer is ripe and ready, in tune with the earth’s wisdom. This way, we can contribute to the development of regional economies too, reducing the costs and pollution that result from long-distance food transportation.

On the way toward a plant-based diet, the so-called “flexitarianism” arises. Those who adopt this kind of diet reduce their meat consumption to a minimum, without becoming exclusively vegetarian. This is also part of what we call plant-based nutrition and has inspired one of the ways in which this trend has evolved. Food-tech companies began to spring in different countries in order to use technology to attain something that seemed unimaginable so far: making plant-based “meat,” i.e., something that tastes like meat, looks like meat, and smells like meat, but is actually not meat. The purpose is to offer the experience of eating a hamburger, with exactly the same look and feel as if you were eating animal meat. This is a controversial though interesting point, since many consider that it is neither necessary nor fundamental to reproduce the taste, appearance, and smell of a piece of animal meat.

Over the years, plant-based diets have gained ground in the domain of gourmet and international cuisine: there is plant-based Italian, Mexican, or Japanese cuisine.

The plant-based movement comprises a whole universe, led by Matthew Kenney, a global expert with dozens of restaurants all over the world, including Argentina.

Behind this phenomenon, or rather at the foundation of this philosophy, is the protection of our planet. In a few years’ time, there will be lots of people in this world, and feeding all will not be easy. Natural resources are being irreversibly depleted, and scarcity is unavoidable.

One of the largest impacts of traditional livestock farming is water consumption and its role in what is known as the water footprint. Producing one kilo of meat requires more than 15,000 liters of water (drinking water for the animal and irrigation for the soil where it is bred). The same surface –for instance, 1.5 hectares– may yield 170 kilos of meat, against 16,000 kilos of plant-based food.

Furthermore, livestock farming generates a high amount of greenhouse gases, which contribute to climate change, and along with agricultural expansion, accounts for 80% of the planet’s deforestation.

The defense of animal rights is one of the pillars of this mindful nutrition philosophy, which seeks to prevent exploitation and abuse of various species. 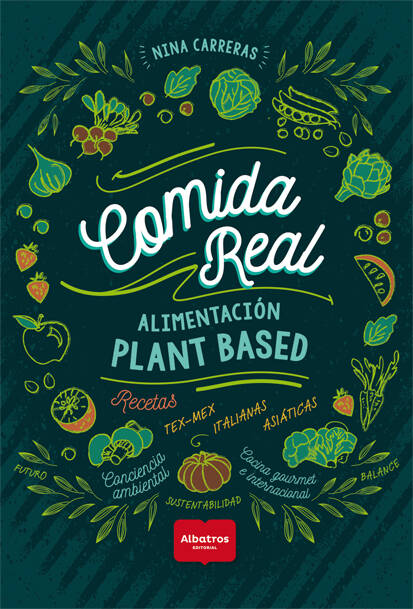